Walking the crowd, looking at all the beautiful people that attend, and getting my delicious butter dipped corn on the cob.  Indian Market differs from Spanish Market in that there are many of the participants in full costume.  Spanish Market has only the Mariachi groups in costume.

I’ll try to remember to take pictures and post them here.

Went 4 wheeling today.  Was shown a new trail that opens a whole new area for me to wheel in.  Lots of side trails and there’s a ton of Indian artifacts to be found.

Got a nice shot of the back of the campground too.

Let’s see how I can put this . . . .    Last night after Josh and Henry finished with the leak that was in the campground area, I found a new leak on a site just above the one fixed.  Not sure if it was something that they screwed up or if it was the increased pressure that caused the leak.  Yesterday I had 2 goofs @ $10/hour digging for over 9 hours with a total of $180 to fix this leak.  Today I had the hole dug fast and nasty by a backhoe for $50 and the whole job was done in 3 hours.  Much better deal and less goofs.  I had to run to Vegas to get some parts and I had planned to do this early, but Nina had other ideas.  With us subdividing the place, she felt she should know how I had hoped to subdivide things and made arrangements for her “guys” to be there for the showing.  8 a.m.  I got to get parts an hour later.

Lunch at Dennis and Anne’s down in the valley.  FRESH picked sweet corn from North Dakota, picked on Sunday on a family farm.  I should go there hunting.  North Dakota is pheasant heaven, except in season, then it becomes Hell for the pheasants!  Dennis also made burgers and dogs flavored with a Korean sauce of some sorts.  Very good.  Desert was melons, strawberries and other types of berries.  Erin loved the smaller berries.  Yeah, we had Erin with us.  Their house was not kid proof and there were a few tense moments while she played with their dog Gunner.  She’d throw his toy and he’d retrieve.  She has little throwing control and it scared us a bit.  They were cute together.  Thanks Anne and Dennis!

Nothing to tell you about my nap, except that I slept in my chair.

Coming into fall soon and it can’t come soon enough for me.  This summer was brutal.  Must be global warming, right?  While I think it’s a cyclical hot period, I’m sure that the science types want to validate their voodoo theories by saying it’s global warming, so I’m gonna jump on board with that shit because I think voodoo is very cool.  GLOBAL WARMING PEOPLE!  BOOGITY BOOGITY BOOGITY!

WOW, did we get rain!  Took almost 800 photos to try to get lightning shots and got one. 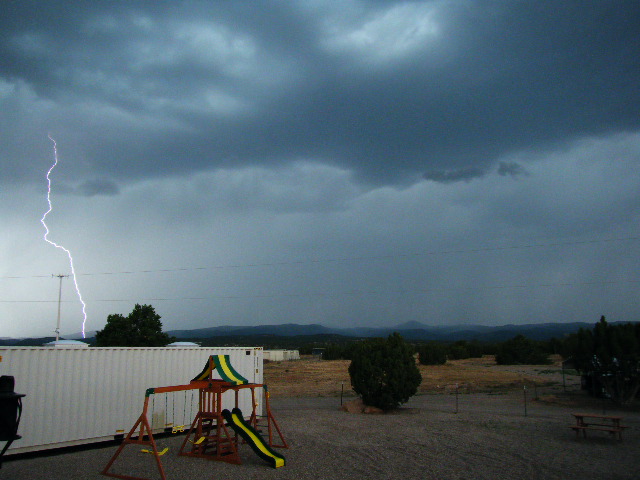 Today we were scheduled to be in the Pecos River Canyon around noon for a viewing of an old store where the owner is trying to sell the equipment.  We went, we looked, and we dismissed the stuff and left.

The above church has one service a year, a Christmas service.  BIG deal out here.  Decided to take a picture this trip past it.  It was around 1/2 a mile from the store we visited today.

Headed back up the canyon after the store and went to the Holy Ghost Campground and scoped out some of the trails we plan on hiking this fall.  Lots of neat old houses on the way to Holy Ghost.  These houses are summer residences that are on Forest Service land that were leased for 100 years.  These houses are now nearing the end of their leases and the F.S. has no intention of renewing the leases.  The house owners are responsible for the removal of the house and restoring the land to it’s original state.  Really?  How is a current owner to know what the land was like 100 years ago?  This was something that the local chapter of the  Sierra Club is demanding and the F.S. is agreeing with them.  Damned enviros!  It’s a shame that these 100 y.o. homes will be destroyed.

On the way home we stopped at the Hummingbird for carrot cake and coffee.  Erin arrived home shortly after we did and she’s a grumpy little brat.  She wants nothing to do with me right now and it will cost her dearly.  I’m gonna delete all the Bob recordings on the DVR.

I’ve got to cut those aluminum blocks out of the springs on my Jeep, they rattle something fierce and drive me nuts.  I’ve determined that they serve no purpose and I will remove them.